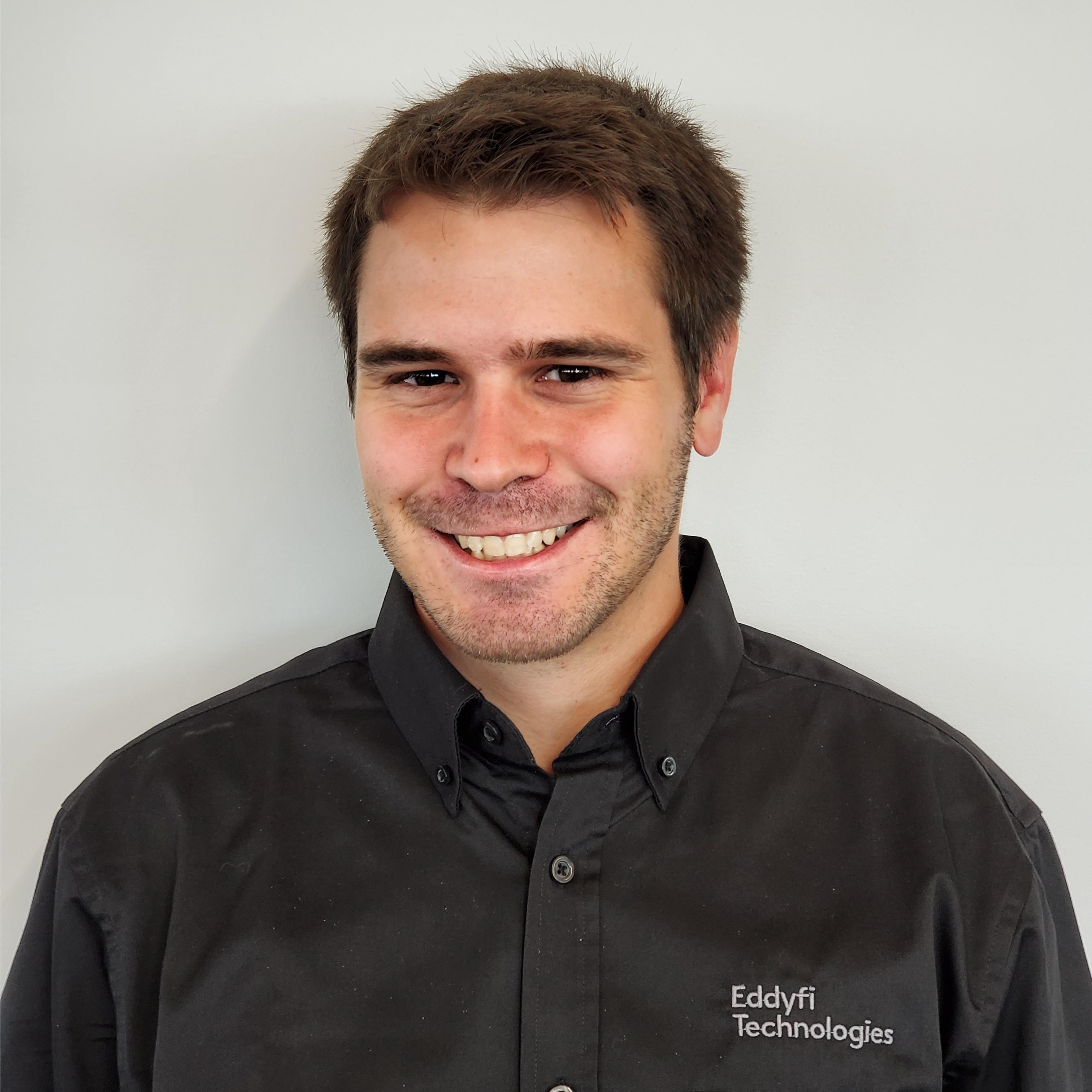 Naval forces around the world have a shared mandate to extend the service life of its aging vessels given the rising costs associated with purchasing new ships. This can be achieved through service-life extension programs whether for a single vessel or a complete naval fleet. These programs take a condition-based approach and require extensive inspection, maintenance, refit, and navy ship upgrades. The detection and assessment of corrosion in ship deck plates is an essential part of these programs. Unfortunately, current inspection methods undermine cost efficient operations, but this article offers the Beyond Current solution developed for the Royal Canadian Navy.

Corrosion can form under vinyl, ceramic tiles, anti-skid coatings and other ship deck floor coverings due to water ingress. Suspect areas can only be assessed for corrosion after the vessel enters the shipyard as it requires the removal of floor tiles and coatings for inspection. Areas of tile delamination are often assumed to be areas of corrosion which may not always be the case. Currently employed survey methods locate tile delamination and corrosion with experience-based observations and tools —not quantitative measurements— which can sometimes provide false positives. Once the floor tiles are removed the surface is ground, and thickness measurements are completed using Ultrasonic Testing (UT). It’s typical to apply the same process to areas prone to corrosion such as galleys, wash areas, and laundry rooms even if they don’t exhibit tile delamination. This unnecessary removal of tiles for corrosion assessment increases refit time and costs. It is estimated that for a typical compartment, the equivalent of one week is lost of work execution due to the inspection process for a team of two workers.

Suspected corrosion repairs can be accounted for in the planning of the refit. This planning will be based on survey results and experience. What cannot be accounted for is the problems incurred with rapidly rising costs when unsuspected corrosion is found. In some compartments, floor tiles and coatings may need to be replaced by shipyard workers simply because they are worn or damaged. In the process of changing the tiles, these workers may uncover corrosion in areas of the deck where there was no delamination or in compartments thought to be immune. These unplanned repairs account for significant costs related to the disruption of the refit schedule. This reduces sea days and impacts on the ship's ability to conduct operational missions.

The extent of the challenges associated with ship deck plate corrosion calls for new solutions that will help reduce overall corrosion management costs. Eddyfi Technologies, in collaboration with engineers close to the Royal Canadian Navy (RCN), has challenged the status quo with a solution sure to make waves in the marine defense and transportation sectors.

Pulsed Eddy Current, or PEC, is a proven non-destructive testing inspection technique that has been used for decades by the energy industry as a screening tool for Corrosion Under Insulation (CUI) without the need to remove insulation materials. A PEC system will use a magnetic pulse to induce eddy currents in the bulk of carbon steel components. Cutting the pulse sharply generates eddy currents in the part. The system listens to the decay of these eddy currents and analyzes the signal to evaluate the remaining wall thickness. Recent development in PEC by Eddyfi Technologies has resulted in a drastic increase in both productivity and detection capabilities, enabling new applications.

Similarities between CUI and deck plate corrosion assessment raised curiosity in the industry. Trials were performed with conventional PEC probes to evaluate if the technology was well suited to address the challenge of inspecting ship deck plates without removing the tiles. PEC allows the examination of corrosion through floor tiles with zero surface preparation. This cost-effective corrosion assessment of deck plates can be performed long before the vessel enters the shipyard. The vital inspection data can be used to plan and schedule repairs in advance, reducing cost and schedule disruption drastically. Our ship deck plate inspection solution features the most advanced PEC system on the market, the Eddyfi Lyft®, and a purpose-built sensor. After satisfactory trial results, there was an opportunity to bring a disruptive PEC technological innovation for deck surveys to the naval industry.

Eddyfi Technologies collaborated with engineers close to the Canadian Department of National Defense to develop a custom solution optimized for assessing corrosion in ship deck plates. Pulsed Eddy Current Array (PECA), a technology unique to Eddyfi Technologies, pulses and listens with multiple PEC sensors simultaneously and it’s this advanced technology that enabled this unique development. The PECA probe developed for deck inspection is a custom array sensor with seven channels and 178-millimeter (7-inch) coverage. The increased coverage is key for optimal productivity on decks. The sensor is designed from the ground up to have the highest sensitivity in low liftoff applications as encountered on ships.

It is relevant to note that although PEC induces eddy currents in the component, it is a very different technology than conventional eddy current survey tools. The system can be operated after standalone training and certification provided by Eddyfi Technologies. It does not require conventional eddy current or electromagnetic testing Level I, II or III certification in order to be used. Furthermore, Lyft has been designed to reduce operator dependence and have a simplified workflow with a single-click calibration called SmartPULSE™.

The solution was qualified on a purpose-built ship deck mock-up featuring machined defects to assess the performance of the system. With satisfactory results achieved, the solution was tested and then deployed more widely for the survey of in-service military vessel ship decks. As part of ongoing refits, PEC was used to scan the decks alongside conventional surveys. Follow-ups were completed where PEC found corrosion, confirming the detection and accuracy of the system.

In the following example, a corrosion repair had been performed a few years before as indicated by the newer tiles. A quick PEC scan showed that corrosion formed in the insert plate and required intervention. Tiles were removed and visual and UT inspections confirmed the PEC findings.

The custom PEC solution detected both generalized corrosion and pitting colonies through the flooring in multiple compartments. In this example, scans were performed in a wash area with two areas of wall loss identified based on the PEC data. Following the PEC scans, the ceramic tiles were removed for visual and UT assessment, confirming the calls made by the PEC inspection team. Generalized corrosion with some deeper pits and holes were assessed and required repairs. 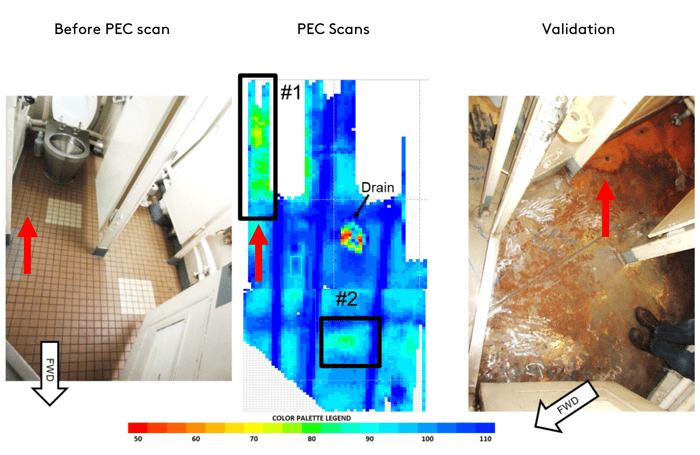 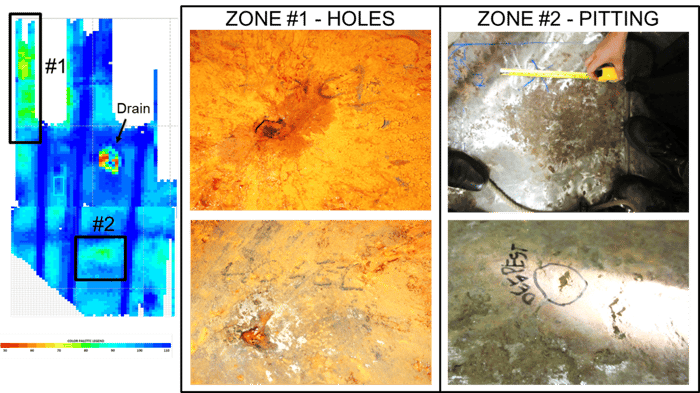 Fortunately, only a small fraction of compartments will have significant damage. This is where PEC can make all the difference. It discriminates sound from problematic compartments with a higher confidence level than traditional surveys. This reduces the number of compartments that require tile removal many times over. Furthermore, since PEC surveys do not require ship deck tile removal, inspection can be performed while the navy ship is in service months or even a year before scheduled repairs. Earlier assessment allows the ship's staff or engineering organizations to plan work accordingly and mitigate cost increases from work arising related to the discovery of corrosion during refits.

It may take a week to remove and reapply tiles in a suspicious but sound compartment following traditional surveys. Using Pulsed Eddy Current is quick, effective and provides reliable inspection results. Scanning a typical compartment 3 x 3 meters (10ft x 10ft) only takes about an hour for a team of two PEC technicians. One technician mans the probe as the second operates the instrument. The typical probe speed is up to 140 millimeters per second on 5-mm (3/16-in) thick plates and will vary with deck plate thickness, desired resolution, and flooring thickness. This scanning speed combined with the seven channels of the custom probe allows the team to scan up to five or six compartments per workday! High productivity translates into more compartments inspected. Health monitoring with scans every one or two years can be performed while the naval vessel is in service, docked, or out at sea.

By bringing advanced and proven technology to the table, PEC has proven effective in assessing corrosion in deck plates without surface preparation requirements. The combination of confidence and early assessment makes Pulsed Eddy Current deck surveys a key element in reducing the life extension costs of aging ships. This permits engineering organizations to better understand the location of critical corrosion areas and plan for appropriate steel renewal before the start of docking work periods.