Winning the War Against Wind Turbine Defects with Early Detection 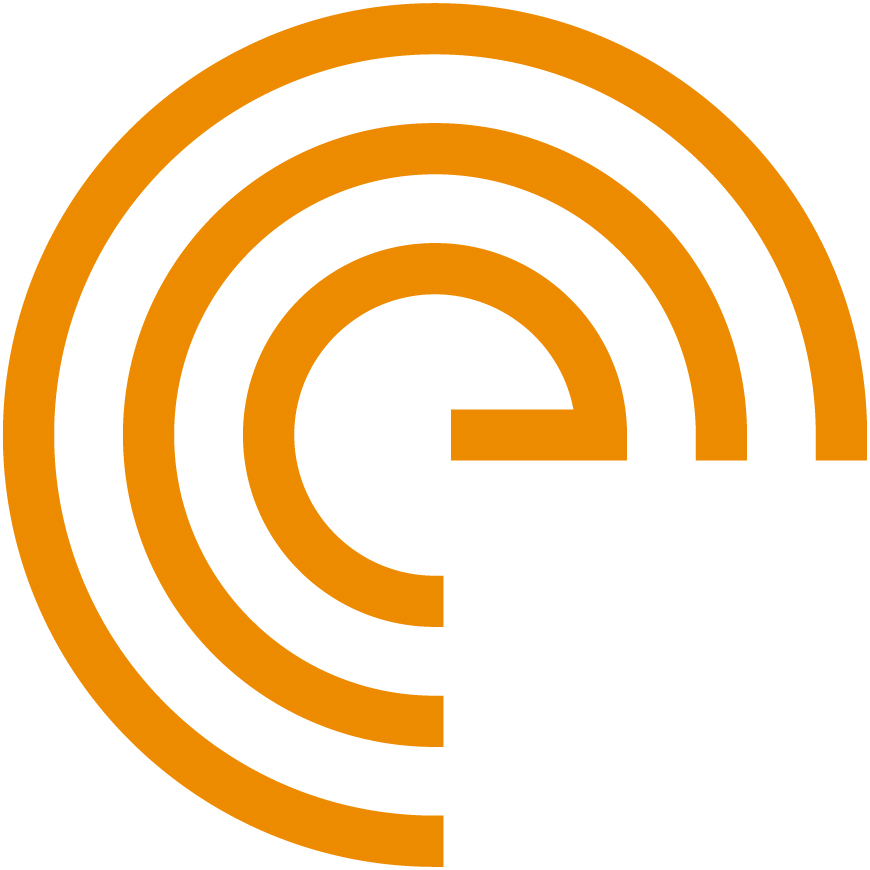 With ambitious and hopeful goals of becoming carbon neutral being declared by countries all around the world, the renewable energy sector has evolved accordingly with wind farms becoming more and more prevalent. It is expected that offshore wind farm capacity will grow from 32GW at the end of 2020 to more than 230GW by the end of 20301. And while the trend towards wind turbines as the supplier of clean and increasingly affordable energy is readily being accepted, the industry has seen criticism from deep roots in the fossil fuels arena with lobbyists wondering why failures aren’t being made more public. Unlike the microscopic lens that coal and nuclear power must endure, wind power presents no standardized failure analysis data shared among its community. One thing for certain is that the rapid development of the wind industry is driving an increased demand for non-destructive testing (NDT), and Eddyfi Technologies understands its role in providing repeatable, actionable, meaningful, and preventative data results. Like any industrial asset requiring a comprehensive risk management program to best support extended useful life, there is no one-size-fits-all solution here. This article highlights how Eddyfi Technologies’ complementary NDT technologies can provide the whole picture amid the whirlwind of renewable energy growth.

The brisk approach of 2030 has countries closely looking at their public targets for carbon neutrality and clean air emission. For example, the European Commission released the EU Strategy on Offshore Renewable Energy which proposes increasing offshore wind capacity from the current 12GW level to a minimum 60GW of ocean energy by 2030 (and up to 300GW by 2050); the world’s largest floating wind farm, Kincardine, was recently completed and is designed to provide over 200,000MWh per year, enough power for 50,000 homes in Scotland over the six wind turbines’ 25-year lifespan; New York City has proposed a $191 million Offshore Wind Vision program to help the city meet its goal of 100 percent clean electricity by 2040 and carbon neutrality by 2050; in China, the installed capacity of wind power at the end of 2020 is 281.72 million KW, with an average power generation capacity of 2MW per unit, or 140,860 wind turbines. The transition from current fuel sources is enormous in terms of the time and technology required for success. Without a proper monitoring and maintenance program in place, unplanned downtime can cost asset owners and operators valuable revenue in what is already a cost-conscious climate.

Dwarfing grand markers like the Washington Monument and the London Eye, a wind turbine can be as tall as 260 meters (853 feet) with 107-meter (351-feet) long blades. These giants typically contain up to 8,000 different parts that comprise of the tower, rotor blades, rotor hub, rotor bearings, main shaft, main frame, gearbox, generator, yaw system, pitch system, power converter, transformer, brake system, nacelle housing, cables, and screws. New installations must undergo quality checks while aging assets and requirements for re-powering demand integrity under performance assessments. With the right tools, reliability and failure prediction models can be generated based on comprehensive NDT data that enables operators to be proactive in their operation and maintenance strategies instead of simply taking corrective action. Let’s take a look at some of the common types of wind turbine failures and the Beyond Current solutions for early detection. 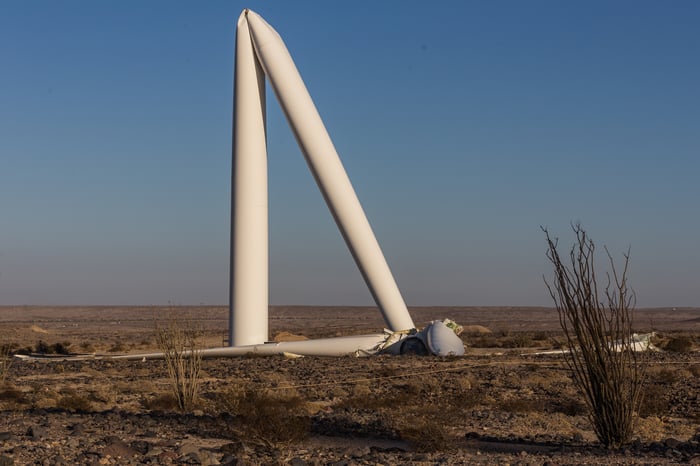 The harsh operating environment and cyclic constraints on wind turbines can result in fatigue cracking, a nemesis all too well known by leaders in offshore oil and gas. Their solution was developed through a collaboration resulting in alternating current field measurement, or ACFM®. ACFM is an electromagnetic inspection technique that uses probes to induce a very small uniform AC current to flow in the test piece and detects the changes in the magnetic field due to the presence of defects. The location, surface length and depth of the defect can be estimated from these changes. Moreover, ACFM can detect and characterize surface-breaking cracks through paint and coatings. Given the similarities between offshore rig inspection for which ACFM was developed and several elements of a wind turbine at the technical and regulatory levels, offshore inspection companies tend to expand their services into offshore wind using their existing know-how. 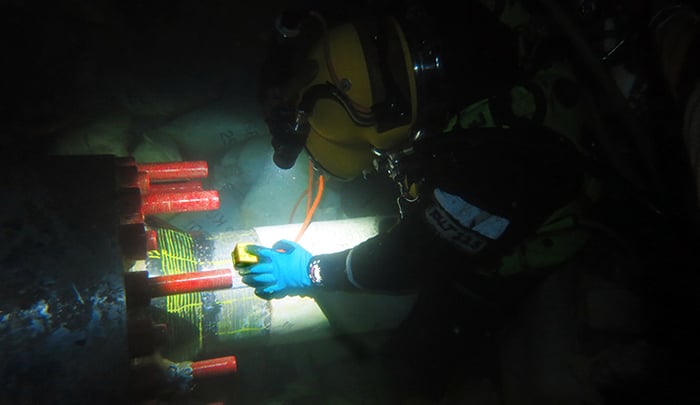 Factors resulting in a generator failure can be:

Recognizing that in order to remain competitive with traditional fossil fuels wind turbines must operate at full capacity, the generator responsible for creating energy as a commodity cannot afford to fail. That’s why ACFM is regularly used to closely assess critical generator attachment welds. With over a 30-year history and reputation for accurately detecting and sizing surface-breaking cracks, ACFM is an essential part of any comprehensive maintenance and repair program responsible for ensuring the reliable operation of a wind turbine generator. And as important as the generator is, ACFM is not limited to inspection here. It is also directly applicable for the assessment of structural butt welds and interconnection flange filet welds, offshore wind turbine jackets, and sometimes in very tight access welds behind bolts around flanges in the base or those up the tower. While the natural response to envisioning wind turbines is to think of them up in the sky, there is also the consideration for subsea inspection of structural welds on both fixed and floating offshore wind power installations. Rapidly replacing magnetic particle inspection (MPI) across different industries, ACFM’s same benefits apply:

If you’re interested in seeing how ACFM is raising the bar for surface inspections, download this free eBook.

It is estimated that there are 1,200 gearbox failures a year, and when they do, the repercussions are expensive. A wind turbine could potentially be taken offline for up to a few months based on availability of parts; these parts make up 13 percent of the overall turbine cost. Large megawatt turbines have become notorious for premature gearbox failures due to axial cracking not typical in gearbox bearings in other industries. Evidence suggests that axial crack issues on the inner rings of bearings increased as the size of the larger class wind turbines came to market with reportedly more failures. The gearbox life can be shortened to one or two years with this kind of bearing damage as the crack propagates to the surface and extends axially along the raceway, ultimately causing premature bearing failure. The rapid strain rates accompanied by impact loading, surface traction, severe and rapid plastic deformation exacerbate the component’s vulnerability. Therefore, it is critical to detect these otherwise undetectable cracks at an early stage.

Enter eddy current array (ECA) testing. An electromagnetic testing technique usually used to inspect non-ferromagnetic materials, ECA is ideal for detecting volumetric flaws such as corrosion, wear, large porosities, and cracking in these materials. It is also being increasingly used for the detection and depth sizing of surface-breaking fatigue cracks in ferromagnetic materials. The main advantage of ECA probes is that they don’t require any couplant or extensive surface preparation; they offer a submillimeter resolution for surface defects, and allow the archiving of fully encoded 2D mapping of the asset being inspected.

Below is an example of a spring-loaded probe configuration that conforms to the profile of the bearing, ensuring close contact and 100 percent coverage of the raceway. The raceway can be inspected within a few minutes with low operator dependency compared to conventional visual testing which is both operator dependent and time consuming. Thanks to ECA, cracks can be detected at an early stage and repair procedures can be initiated. 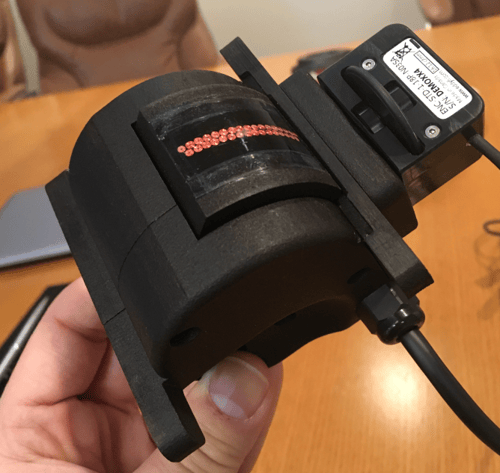 Beyond detecting axial cracking in gearbox bearings, ECA has proven itself valuable for the inspection of bolt holes. Prone to fatigue cracks, bolt holes found on wind turbines can effectively be assessed by ECA. 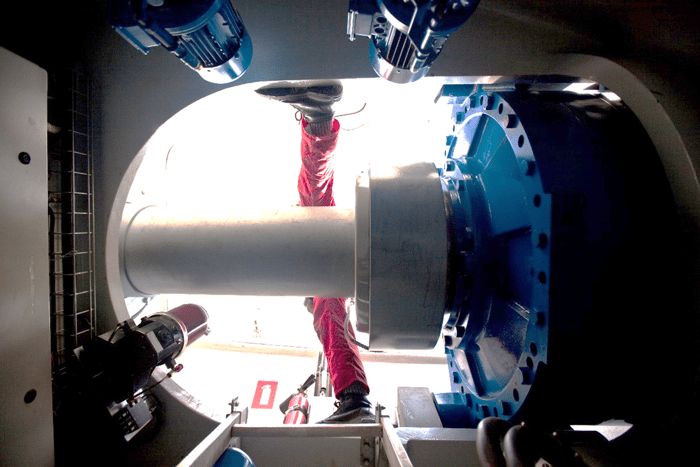 This purpose-built circumferential ECA probe offers 360-degree coverage in a single pass. It is spring-loaded to ensure close contact with the surface. The custom probe is able to detect submillimeter-sized cracks before they become a threat. 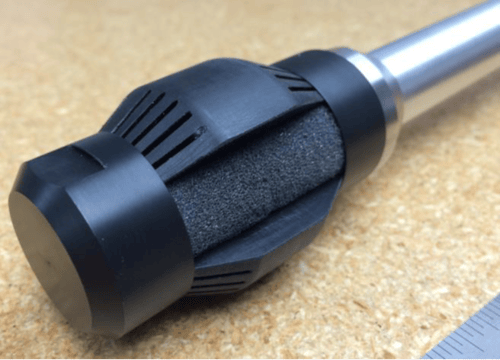 Susceptible to excessive bending stress, buckling, large deformation, or fatigue, wind turbine blade structural failures happen more than you may think. According to one report, with approximately 700,000 blades operating globally, on average there are 3,800 blade failure incidents every year. It is commonplace for visual testing to be used to identify any obvious failure mechanisms. Rope access technicians, drones, and photography from the ground level can offer insights on the external condition of wind turbine rotor blades. However, industry has recognized the safety and economic benefits of deploying an inspection robot to perform this crucial work.

The Magg™ is a small but powerful vehicle equipped with rare earth magnets that keep the robot securely attached to the wind turbine tower with the tracks positioned to ensure the best possible traction. This miniature magnetic crawler offers a unique solution for high-definition remote visual inspection and includes 100 meters (330 feet) of tether and a portable control system with real-time recording of live video, still images, and sensor data. Its durable construction and ease of use make it perfect for examining a wide range of steel structures, and it is regularly used for the inspection of wind turbine blades, both internally and externally to get the whole picture. An article by offshoreWIND.biz highlights ATAM’s use of the Magg for blade inspection at ORE Catapult’s facilities in Northumberland. With Eddyfi Technologies’ robotic solutions reducing risk, additional advantages come from operational performance and productivity. Magg works in wind and rain and can also work at night. It will get close to the blades set at 6 o’clock and zoom in to capture 1080p images and video. With the lasers turned on, it provides a measurement reference. The inspection robot can be operated in the comfort of the tower base or an inspection truck. The high definition, 360-degree continuously tilting camera head on the Magg gives operators a complete look when it comes to visual data collection. Moreover, the camera can be easily removed from the vehicle and attached to a deployment pole for ad-hoc and nearby inspections. 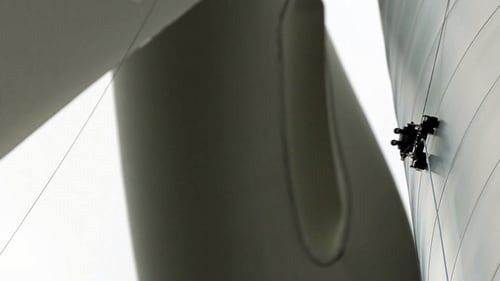 The following video features live footage of a structural integrity assessment at an alternative energy wind farm. The operator deployed the Magg from the top of the nacelle down the center channel, the largest area of the blade. At the hub side, the vertical distance is nearly 2 meters (6 feet) but tapers down to only a few centimeters or inches at the tip. The Magg can be seen climbing up the tower to the blades allowing the camera to inspect for damage. According to the site supervisor, he was impressed with what he saw. He had just been up to the same tower doing a visual inspection and noted that the HD camera captured better viewing and superior images. Earlier we mentioned that there was no one-size-fits-all solution for the inspection of wind turbines, and it’s clear that different techniques deliver unique data essential for really understanding the asset’s health. Access has historically been an obstacle when it comes to regular inspection and maintenance of wind turbines given their grand size let alone their often-remote location. On the contrary, the Magg used for remote visual inspection on wind farms has opened the door to so much more. Eddyfi Technologies now offers standard NDT enabled robotic solutions for ACFM, ECA (check out this video), and ultrasonic testing. Magg enabled crawlers are taking advanced wind turbine testing to a new level with more frequent assessments available to supplement a digital twin and support strong asset health monitoring programs. It is precisely this type and volume of blended data that can contribute to standardized failure analysis data and an overall successful future for the renewable energy market as it winds up. 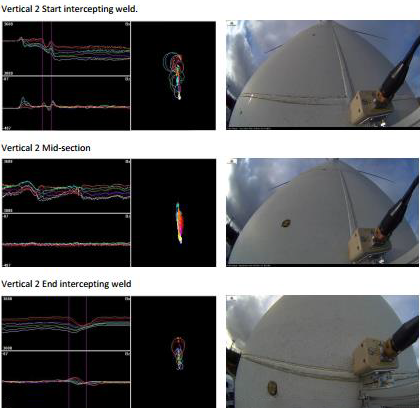 We invite you to contact our team of experts happy to offer advice on implementing a better condition monitoring program for your operations today.