Magnetic Flux Leakage (MFL) is the most deployed technology for corrosion surveys of storage tank floors. MFL has a proven track record spanning over decades and is considered an effective, robust, and reliable approach. The primary advantage of MFL is its ability to rapidly locate and estimate the size of corrosion features while covering very large areas in a quick and efficient manner. Tank owner/operator requirements are increasingly extending beyond simply needing to know where and how deep the corrosion is. There is a growing demand to report whether corrosion originates at the top surface (product side) or the bottom surface (soil side). This is something that cannot be determined from MFL data alone. Without the use of technology, gathering this valuable information is a time consuming, laborious, error-prone task involving a whole lot of ‘hands and knees’ time.

STARS (Surface Topology Air Gap Reluctance Sensors) is Eddyfi Technologies’ proprietary, patented technology incorporated in all Silverwing Floormap tank floor scanners since 2012. STARS data is collected alongside MFL data during an inspection and used by the Floormap software to automatically discriminate between soil side and product side corrosion.

STARS improves MFL sizing accuracy. The amplitude of an MFL signal from a top-side defect is different from the bottom side; STARS in combination with MFL helps reduce this ambiguity.

STARS also provides a remarkably detailed, nearly photographic quality map showing the top surface profile, as shown below with the image of a sketch plate. This is a useful tool for the operator to easily view the extent of corrosion and classify MFL features while adding an extra dimension to help visualize plate condition.

This relatively new technology has already provided substantial real-world benefits to most tank owner/operators, but it is generally not well understood. We aim to change that. 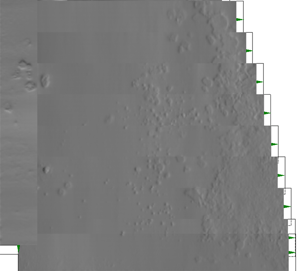 Let us first take a close look at the magnet bridge and sensor arrangement on the Floormap scanner.

As seen in the image above, the horseshoe shape magnet bridge is suspended over the plate being inspected. The Floormap includes two separate Hall-Effect sensor arrays, one for MFL and the other for STARS, each with a resolution of 64 channels across the 300-millimeter (12-inch) width of the bridge. Hall-Effect sensors are sensitive to magnetic fields that are perpendicular to their surface.

But what exactly are our STARS sensors measuring?

Signals from MFL and STARS are shown in Figure 3 from a plate containing machined, semi-spherical defects with peak depths of 20%, 40%, 60%, and 80%. 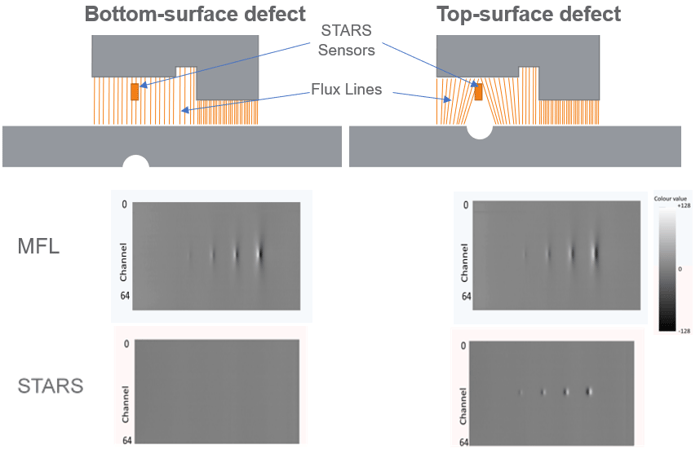 Figure 3 MFL and corresponding STARS signals for bottom-side and top-side defects. STARS only has indications when defects are on the topside

STARS works on the principle of air-gap reluctance. When scanning over areas with no product side corrosion, the gap will remain mostly constant. The magnetic flux lines will travel vertically, taking the path of least reluctance between the pole and plate surface. They travel parallel to the STARS sensor, do not intersect it, and there is no response from STARS.

A difference in air-gap, caused by product-side corrosion changes the reluctance of the magnetic path. The magnetic field lines take the shortest path, the path of least reluctance, and angle away from vertical towards the edges of the defect, intersecting the STARS sensor.

The beauty of STARS is that the technology does all the hard work for us, allowing the Floormap to make simple, reliable top/bottom decisions while providing a beautiful, high-resolution image of the plate surface. All users need to do is filter the view with a simple button click to show either. 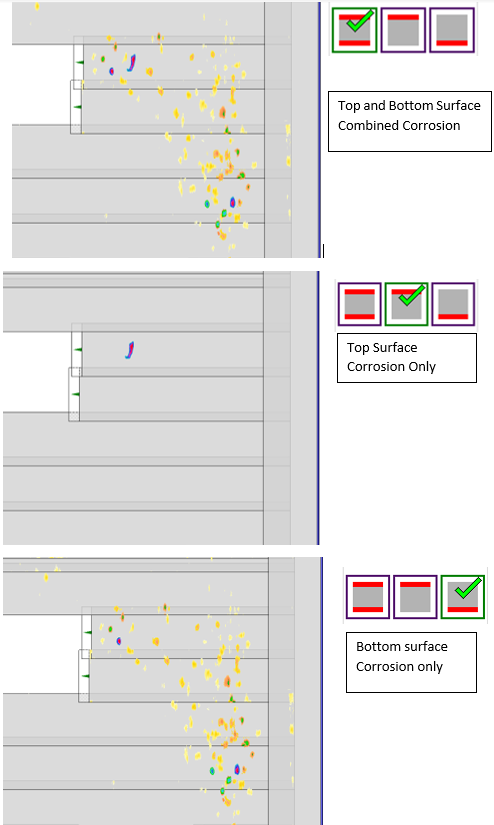 It’s written in the STARS

The STARS map in Figure 4 shows a tank floor plate of nominal 6mm (0.2in) thick, with a 6mm (0.2in) thick fiberglass lining installed on top. During inspection, very high amplitude 70% to 90% loss MFL signals were detected, but the pattern did not look like corrosion. The operator could not perform any UT or visual inspection through the lining. The only option available in the past would have been to break out a section of lining to perform other NDT to verify the MFL response - not exactly non-destructive but switching to the STARS view revealed all. 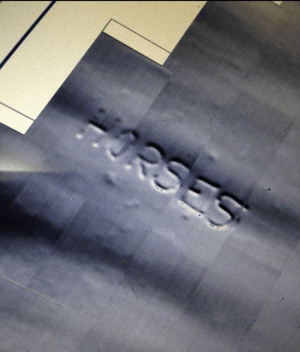 Figure 4 Weld lettering presented by STARS through a thick coating

Here, STARS shows us that there are some minor top-side corrosion, the plate is buckled as illustrated by the large area of shadows, but the main signals are generated from surface welds forming the word ‘HORSES’, created by a welder practicing his welding skills (and handwriting) at some point in the distant past. This image, although pretty unique, is a great illustration of the power of STARS demonstrating another advantage of being able to distinguish between the already discussed material loss in the plate but also locations of depositions such as welds that may be added on top of the plate. This is identified on a STARS map with a phase change from white to black for depositions and black to white for material loss.

In summary, STARS not only discriminates between product or soil side corrosion, it also helps determine if an MFL signal is caused by loss of material or additional ferrous material such as a weld. This has a huge advantage of helping identify most ‘false calls’ found in MFL reports which are actually generated from the roughness or undulations on the plate surface. Being able to accurately visualize the surface and determine if MFL signals are from corrosion, buckling, or surface welds results in more accurate reports reaching the tank owner and minimizing unnecessary repairs.

We have some interesting plans for STARS in the near future, so subscribe to our blog for updates sent directly to your email.

So… Why does this tank bottom have the word HORSES welded into it? We really have no idea. Use your imagination and submit your answer here (funniest answer will receive some Beyond Current swag!).