The goal of the work was to use simulation in order to determine the resolution capabilities of a “daisy” probe used for the inspection of fastener holes. The concept was to put the probe on top of the test specimen and to look for cracks that tend to radiate out from the fastener holes. Using CIVA, several inspection strategies, varying the number of elements used and their delay laws, were investigated. See figures below.

The client’s industrial constraints included size, cost and resolution of the probe, which affected the number of elements that could be used in the probe design. The simulation results allowed tradeoffs among cost, size and performance to be evaluated along with the characteristics of the radiated beam.

Beam simulation when all elements of the probe are fired in parallel. An horizontal slice of the radiated acoustic beam centered at 20mm depth is illustrated.

Beam simulation using 8 elements at a time. In this case a multiplexed configuration is used to perform electronic scanning by sequentially firing groups of 8 elements. The beam profile and a horizontal slice of the radiated acoustic beam centered at 20mm depth are illustrated (left and right pictures, respectively). 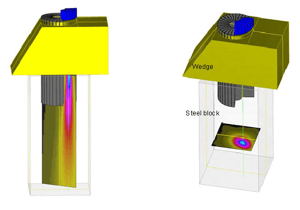