Butt weld inspection with an ultrasonic technique involves investigating the total weld volume plus the heat affected zone region on each side of the weld. This implies that inspection on both sides of the weld is required when accessible. Weld inspection using the Total Focusing Method (TFM) also requires assessment of both sides. A system with multi-group TFM capabilities is thus required if one wishes to perform the weld inspection from both sides simultaneously. This article focuses on exactly that.

The TFM technique was introduced to ASME code in 2019, and the ISO standard is entering the final stage before publication. TFM is used today for various applications such as weld inspection, High Temperature Hydrogen Attack (HTHA), and Hydrogen Induced Cracking (HIC) detection. Eddyfi Technologies has tremendously invested to improve the technique on its various systems —Mantis™, Gekko®, and Panther™— with the ultimate goal of proposing a technique that’s compatible with the productivity and sensitivity expected by service companies and asset owners.

Capture 3.2 brings multi-group, i.e., several probes, and multi-mode capability together. It is possible to combine up to four groups/modes. Multi-group is particularly helpful when dealing with weld inspection as butt welds must be inspected from both sides. With an architecture up to 64x128, the Gekko portable Phased Array Ultrasonic Testing (PAUT) and TFM instrument can use two 64-element probes to perform TFM on both sides of the weld with large apertures providing optimum spatial resolution. 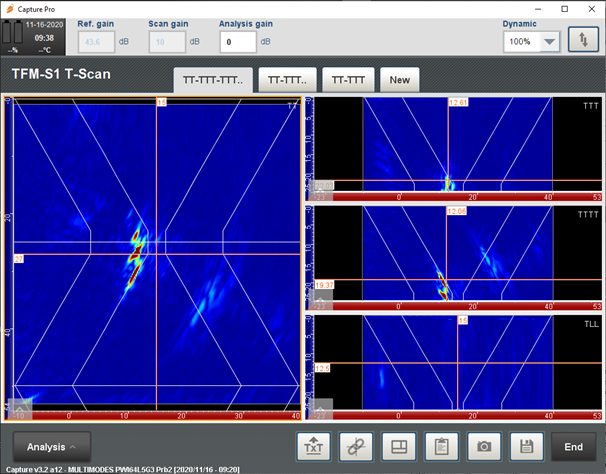 The multi-group configuration shown has two groups using different 64-element probes each performing a PWI inspection with all the calibration tools described before (element check, wedge delay calibration, TCG, Amplitude Fidelity). The TFM uses the TT mode taking into account the first and second legs which allows the user to simultaneously see the TT and TTTT modes. This configuration allows the detection and characterization of all the defects.

The multi-mode configuration shows four modes, TT, TTT, TTTT and TLL, simultaneously using a fast FMC acquisition. The TT mode is calculated based on the first and second legs while the other modes are only calculated within one thickness of the plate. One can compare the detectability of the various defects using the various modes.

Both configurations are illustrated in the following video.

Capture 3.2 offers two more improvements for productivity. The first is the possibility to calculate the envelope of the TFM image. The envelope requires a reduced grid resolution to obtain the same amplitude fidelity using less pixels and thus improving productivity. For resolution less than 93 kpixels, the TFM calculation has been improved by 60%.

We illustrate these capabilities using the multi-group explained before. To inspect the 25-millimeter (1-inch) plate, we use a 50x52mm (1.97x2.08in) Region of Interest (ROI) area to make sure we inspect the full volume of the weld and the heat affected zone. The two images below show the scan plan performed for the inspection. A PWI configuration is used with a sectorial scan performed between 40 and 85 degrees with a step of 7 degrees. This means that we are only using 7 excitations instead of 64 for an FMC. Some new features of Capture 3.2 are all the indications superimposed on the 3D view (element numbers, index offset, component thickness, etc.) and the angle between the refracted angle and the bevel. The latter is available for both PWI and PAUT. The values turn green when the angle between the refracted angle and the bevel is less than 6 degrees and orange if less than 8 degrees allowing inspectors to set their scan plan perfectly.

Data can still be exported in the 3D view of the component as shown in the following image with scan position indication. You can also see on the right of the C-scan that video smoothing has been added to make images look nicer. 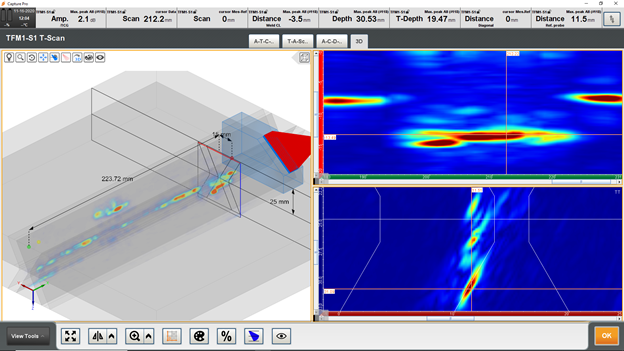 Lower productivity was previously seen as a drawback of the TFM technique. Capture software now provides multi-group and multi-mode capabilities at scanning speeds equal to or faster than PAUT inspections while providing optimum spatial resolution.

Ready to raise the bar in your TFM inspections and stay Beyond Current? Contact us now discover Eddyfi Technologies solutions for better and faster assessments today!