High Density Polyethylene (HDPE) pipes are often chosen over carbon steel with their appeal of resistance to aging and corrosion, at a lower cost. Butt-Fusion (BF) and Electro-Fusion (EF) welding processes are the most common joining processes for HDPE pipelines. Defects for BF welds include planar flaws due to poor welding processes, cold fusion welds caused by incorrect welding procedures, inclusion of particulates and weld mismatch. In comparison, common problems with EF welds during manufacturing include voids, lack of fusion and an incorrect heating cycle resulting in a weak joint.

HDPE presents several challenges for ultrasonic inspection to detect any of these common defects. It has a high attenuation preventing the use of shear waves, even longitudinal waves are deeply attenuated (0.3-0.5 dB/mm at 2.25 MHz); therefore, acquisition is often limited to the shortest inspection range possible. The longitudinal velocity of sound in HDPE is around 2150 m/s to 2500 m/s like that of standard Rexolite wedges; this makes the generation of high angle beams difficult.

Several ultrasonic methods were investigated to evaluate their sensitivity to detect defects: Time-of-Flight Diffraction (TOFD), Phased Array Ultrasonic Testing (PAUT), and Total Focusing Method (TFM). In ASME Section V Article 4, the ultrasonic examination of fusion joints of HDPE pipes is described in the mandatory Appendix X for all ultrasonic techniques. The code asks that for all classical parameters related to calibration checks, sensitivity settings, sizing method, and scan plan, the examination coverage should include the fusion face ± 8 millimeters (0.3 inches) on each side.

To illustrate the capabilities of each method, we used two samples: 17- and 35-millimeter (0.7- and 1.4-inch) butt welds containing several defects. The 17-mm sample contains a crack between the two beads along the root and a 3-mm (0.1-in) flat-bottomed hole. The 35-mm (1.4-in) sample contains three 1-mm side-drilled holes (SDH) on one side, and a set of nine SDH close to each other with a 4-mm notch along the backwall on the other side. Some of these defects are shown in the following images. 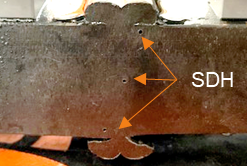 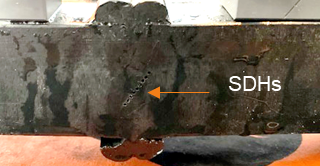 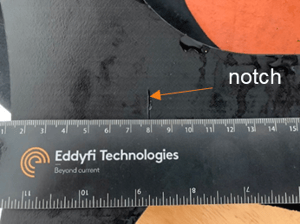 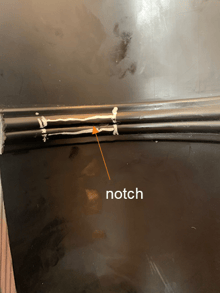 It has been documented that the TOFD technique can detect defects in HDPE material. To fully inspect the volume of the 35-mm (1.4-in) butt weld, we used a combination of two TOFD configurations. The first one uses a pair of 2 MHz probes with a diameter of 5 mm (0.2 in); the wedges are made of a low velocity material close to that of water. This allows the generation of 60° refracted waves. The Probe Center Space (PCS) is 85 mm (3.3 in) to create an intersection point at two-thirds of the thickness; it is verified by using the arrival time of the lateral wave and/or backwall echo. The second pair uses traditional L70 Rexolite wedges. The beams cross relatively deep with a very shallow angle.

The frequency of the lateral wave and backwall echoes were measured using a Fast Fourier Transform (FFT) estimated to be between 1 and 0.7 MHz with 85% and 100% bandwidth at –6 dB, respectively. No mode converted backwall is detected confirming that shear waves cannot propagate in these samples. The lower frequency content also leads to more divergence of the beam in both the active and passive plane. The scan plans are showed in the following figures.

The following figures show the results obtained with both configurations with no pre-amplification or filtering used. The noise measured for each configuration is below 10% as requested by ASME Section V, Article 4. Signal-to-Noise Ratio (SNR) is measured above 20 dB for all defects. In the first figure obtained with L60 low velocity wedges, we can see on the left of the mechanical scan that only the middle SDH is detected; the top and bottom SDHs are in dead zones. On the right side, multiple echoes are detected for the group of nine SDHs, although it is not possible to distinguish them individually. The wavelength is bigger than the distance between the SDHs.

The bottom SDH on the left and the notch are detected and sized using the L70 Rexolite configuration.

All PAUT results were obtained with a 64L2.25-G3 probe, i.e., a 2.25-MHZ, 64-element probe with a 0.6 mm (0.02 inch) pitch and 10 mm (0.4 inch) elevation. We evaluated the sensitivity of detection using various wedges: a soft wedge composed of a rubber membrane filled with water, a typical shear 55° Rexolite wedge, and we also tested the probe in direct contact with the HDPE pipes. For each configuration, a Time Corrected Gain (TCG) is applied to compensate for the sensitivity at various depths.

The following figures show the results obtained with the water wedge. The water wedge conforms well to various pipe diameters. The wedge delay calibration is performed to extract the angle and height of the wedge. The delay law is a projection that focuses on the fusion face using the full 64-element aperture. All the 1-mm (0.4-inch) SDHs are detected with a strong SNR of 25 dB. The frequency of the bottom SDH is measured at 1.5 MHz with a bandwidth of 40%. Like the TOFD results, PAUT is not able to distinguish the nine SDHs close to each other due to a 1.6-mm (0.06-in) wavelength. The wedge echo is seen afterwards, past the 8 mm (0.3 in) of the required volume examination. 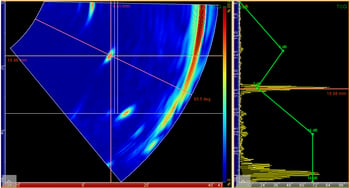 We then used a SW55 Rexolite wedge comparing 32- to 64-element apertures. Due to the identical velocity between Rexolite and HDPE, the refracted angle is 36° for L-waves. Just like the water wedge, we focus the energy along the fusion face. A 2D CAD file of the HDPE pipe is imported to see the weld beads at the cap and root.

Ray tracing shows that the high angles hit the front of the wedge. It is thus difficult to inspect the top part of the fusion face including the 8 mm (0.3 inch) located on the opposite side; an inspection from the other side would be required to obtain full coverage. The sectorial scans for both the 32- and 64-element apertures show a clear detection of the three SDHs. 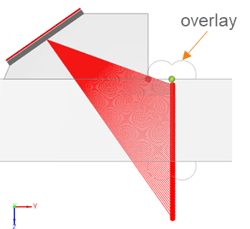 The inspection of the notch with the two configurations show that the 64-element aperture provides a better spatial resolution and SNR (24 dB vs 16 dB). There is also a better distinction between the corner echo and tip diffraction due to the smaller beam spot. The 64-element aperture would be greatly beneficial for thicker pipes.

The same configuration was applied to the 17-mm (0.7-in) sample. The following images show the results obtained for the FBH and the crack detected with a 16 and 24dB SNR, respectively. The combination of the CAD import and 3D export tool available with Capture™ 3.1 software shows the two defects in the 3D representation of the geometry.

Finally, we used the probe directly on the pipe. The front face of the transducer is adapted for Rexolite and thus adapted for HDPE as well. We can see a strong surface echo, but it is outside of the 8 mm (0.3 in) examination coverage required by the codes. This configuration allows detection of all the defects without any wedge echoes. Despite being at normal incidence, the no-wedge configuration allows detection of the top SDH. The high attenuation leads to lower frequency content; the pitch of the probe becomes quite small compared to the wavelength. The configuration thus does not generate any grating lobes.

We then evaluated the TFM method for inspecting the HDPE samples. When performing FMC/TFM, we fire each element individually. While the reconstruction process uses the full 64 elements, the excitation of only one element may not be enough while inspecting thick and attenuative materials. Eddyfi Technologies developed a new TFM process called Plane Wave Imaging (PWI). Instead of firing the element one by one, the system performs a sectorial scan with few angles for the emission and TFM for reconstruction. Firing all the elements at the same time sends more energy into the part leading to better sensitivity.

We used PWI with a 35 to 85° sectorial scan and a step of 3° to inspect the 35-mm (1.4-in) HDPE sample. Results are presented with the gain used and scanning speed achieved.

The gain required for PWI is 17 dB less compared to FMC/TFM. We can see that the electric noise starts to appear when looking at the notch. The SNR measured for the tip diffraction is 13 dB while it is 28 dB with PWI. This is particularly important when dealing with thick HDPE components. The overall energy level, thus sensitivity, depends on the number of angles used during the PWI/TFM process. It is therefore possible to improve even more by using more angles for the emission. We can see that scanning speed was also improved by a factor greater than three times.

Most defects for HDPE butt welds are vertical along the fusion face. One of the advantages of TFM is the possibility of detecting defects through a multiplicity of paths or modes. Odd modes, meaning modes that have an odd number of paths, are good for the detection of vertical indications. One of these modes, the LLL, is carried out when the ultrasound propagates inside the part with a direct longitudinal wave, reflecting off the backwall, reaching each pixel of the TFM area, and returning to the probe all while keeping the longitudinal wave type. Since shear waves don’t propagate, there is no potential mode conversion after reflection off the backwall. The following figures explain an indirect odd mode. 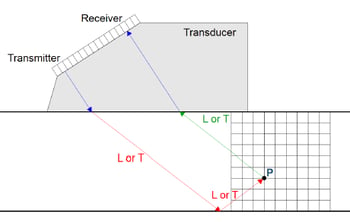 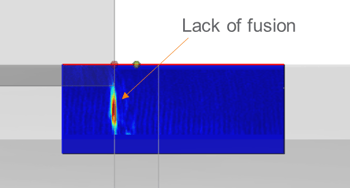 The following results were acquired in an area without a defect (top) and with a lack of fusion (bottom). In the results without a defect, there is a weak vertical observed which is the diffraction due to the weld bead along the root. In an area with a defect, a vertical echo is clearly seen in the TFM image and in the D- and C-scan images. The LLL mode can be complementary to the direct mode.

While HDPE presents several challenges for ultrasonic inspection, the M2M Gekko® instrument coupled with Capture software provides all the tools necessary for easy and sensitive inspections starting with improved TOFD channels and the 64-element aperture for PAUT and PWI for TFM.

Put our advanced inspection solutions to the test! Contact our NDT experts to discuss your challenging pipeline assessments and stay Beyond Current.