Cast and spun iron pipelines have been used within the utilities sector for transportation of waste and clean water supplies around vast national networks for centuries. Some of these pipelines manufactured and laid over a hundred years ago are still in use today. Generally, these pipelines are made from fairly thick material and later with internal and external protection. Over time, these pipelines suffer degradation and often result in catastrophic failure without warning. This can inevitably affect water supply and waste drainage, causing disruption to communities and costing suppliers a great deal in repairs and clean-up operations. This article shares a case study on the applicability of magnetic flux leakage, or MFL, for inspecting spun and cast iron pipelines for early defect detection.

Cast/Spun iron differs from steel in that it has a higher carbon and silicon content which makes it cheaper to produce than steel. Its corrosion resistance is comparable to that of carbon steel or even better depending on the alloy content. Due to a high carbon content, graphite —which is cathodic compared with iron— forms in the alloy microstructure where it can be found as chips (grey iron) or nodules (ductile iron) depending on its composition and heat treatment.

This potential differential creates a damage mechanism known as graphitic corrosion or graphitization; this phenomenon occurs in non-alloy cast iron exposed to medium acid or soft water. Water that has a low hydrogen sulphide content (1 ppm) also encourages graphitization. Graphitization tends to penetrate the material but at progressively slow rates, sometimes over many years. When this type of corrosion occurs, a layer of iron oxide containing graphite forms on the surface. This layer preserves the shape of the component while corrosion is taking place and, therefore, this type of corrosion cannot be detected by means of a visual inspection.

The service life of most cast iron components in aerated and alkaline domestic water systems at ambient temperatures has proven quite satisfactory, mainly due to the thickness of moulded parts and to a uniform, moderate level of corrosion.

In the water distribution system, cast iron network longevity can exceed one hundred years but, in the main, these systems will require protection in the long term. Quite often, the internal side of cast iron pipes are protected using simple linings of the bituminous varnish type. Nowadays, cement mortar-based linings are used. External protection against corrosion often consists of a several hundred-micron thick bitumen coating.

Given the fairly thin external coating thickness and strong magnetic attraction from the cast iron itself, Eddyfi Technologies' Pipescan HD™ MFL system is the ideal inspection tool for rapidly scanning in situ pipelines for detection of graphitization or weakened material. Excavation is required as direct access to the external surface is needed; however, this would also be the case for conventional inspection methods such as visual and ultrasonic testing (UT). 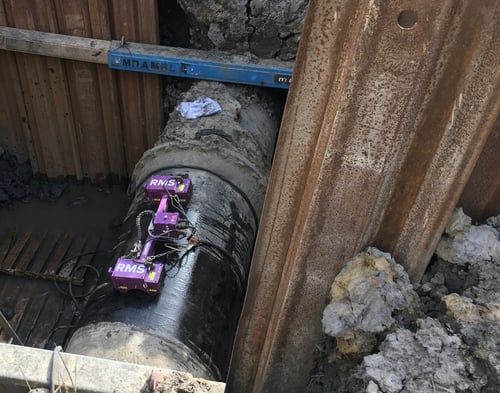 Historically, ultrasonic testing has been used as an inspection method for random spot measurements, although due to cast iron being a highly attenuative material with its large grain structure and a rough external surface, this often brings limitations with poor amplitude signals and sometimes unreliable results.

The magnetic flux leakage technique is far more tolerant to a rough external surface and can cover large areas very quickly. To prove MFL is suitable in this particular application, trials were performed on a real sample which was known to have suffered some degree of graphitic corrosion. The aim of the trial was to both demonstrate the effectiveness of the MFL technique for detecting graphitization and to demonstrate the inspection efficiency given the vast amount of area that needed to be covered in real life inspection scopes.

The Pipescan HD with Swift M data acquisition system were used to rapidly screen the pipe wall and locate areas of graphitization with a predetermined reporting threshold. In this case the reporting threshold (horizontal red line) was set just above the base line noise level, ensuring near maximum sensitivity. 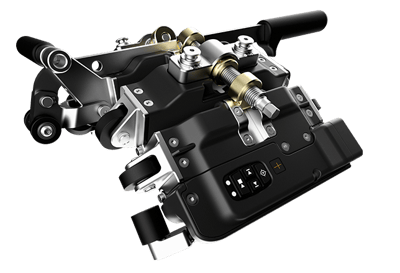 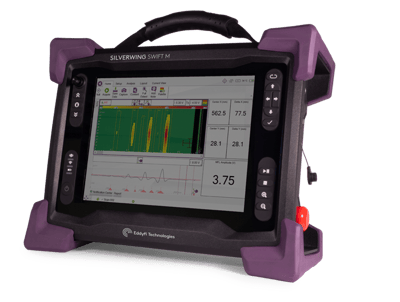 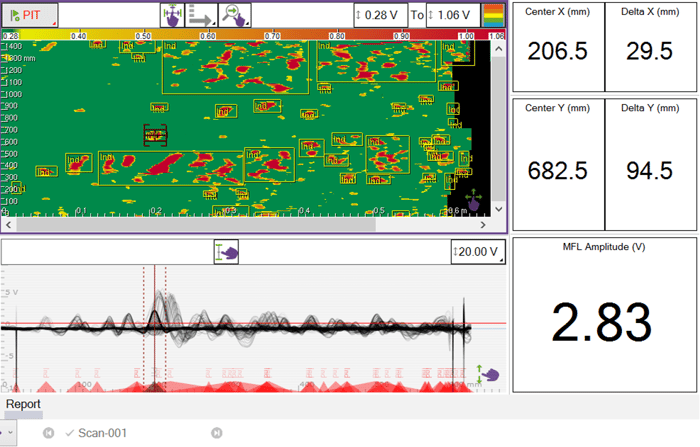 As the Pipescan HD is primarily a screening tool and uses a magnetic inspection technique, signal output (V) is measured as volumetric loss of material and not specifically defect depth. Alternative sizing methods (UT/pit gauging) are then used to measure defect depth and remaining wall thickness, respectively.

Eight longitudinal scans were performed around the full circumference of the pipe, approximately 600mm (23.6in) in length. 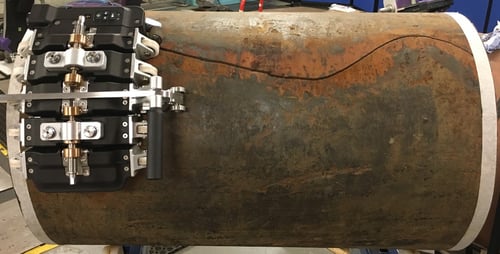 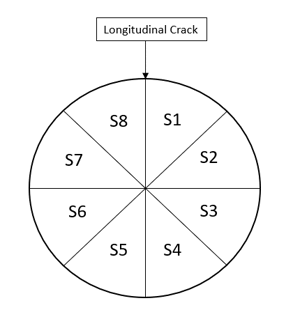 The below C-Scan data was collected from the Pipescan HD and Swift M system. A clear pattern can be seen and is displayed on a varying colour scale. Nominal wall thickness is displayed in green and defected areas with an amplitude change can be seen in shades of yellow and red.

Once the pipe sample was fully scanned, it was then sent to be externally blasted to reveal the areas affected by graphitic corrosion. This can be seen below in both the C-Scan display (pre blasting) and the photographs (post blasting). 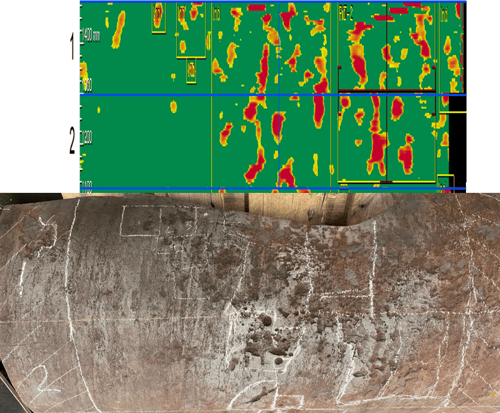 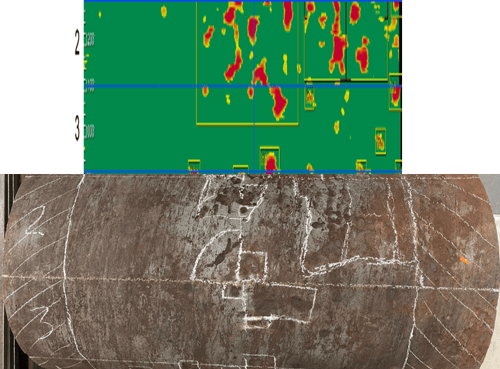 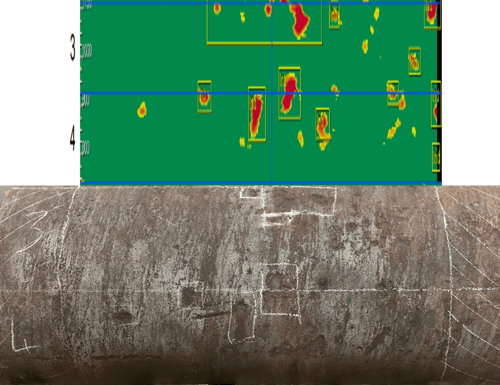 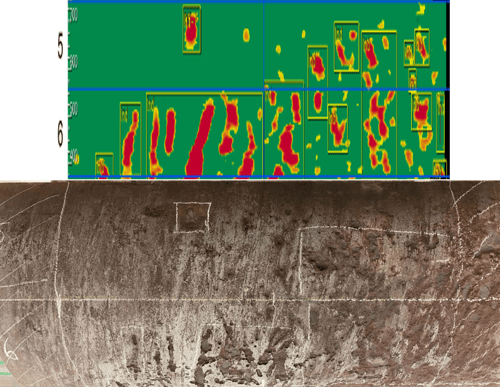 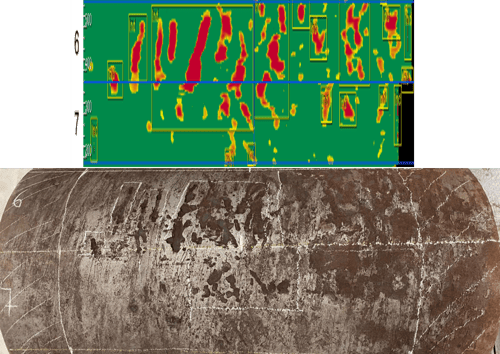 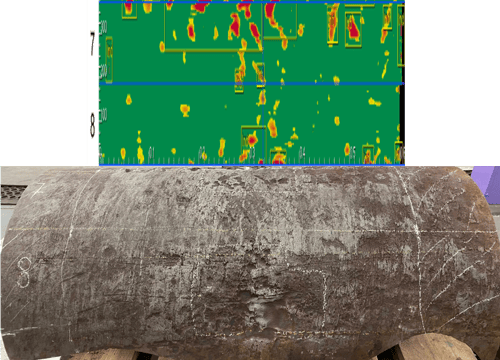 In conclusion, the MFL data collected by the Pipescan HD system clearly displays an amplitude change and therefore a change in material composition at specific areas on the pipe sample. This was not visually seen until blasting the external surface for validation. These results prove that the Pipescan HD magnetic flux leakage system by Eddyfi Technologies is effective and efficient for the detection, with some degree of severity, of graphitization in cast and spun iron material with its ability to rapidly cover large surface areas like that of water utilities pipeline networks.

See the Pipescan HD in action in this video and request a remote demo with one of our NDT experts who will be happy to answer any questions you may have and keep you Beyond Current.