Screening for corrosion under insulation is an enormous expense for asset owners. Many technologies are available for the task, but they are not all equal, cost and productivity wise. After analyzing standard industry prices, comparing radiometric profiling (RP), digital radiography (DR), real-time radiography (RTR), and pulsed eddy current (PEC) technologies. It turns out that PEC array (PECA) can be around 1.5 times cheaper a meter and 5 times more productive over the same 8-hour shift than, for instance, RTR. Read on to find out why.

A while back, my colleague Marc Grenier discussed the causes and mitigation of Corrosion Under Insulation (CUI). Later on, I presented the pros and cons of seven of the most popular inspection methods used to look for CUI. In a nutshell, though, CUI is a plague. It’s one of the most important problems associated with insulated, high-temperature steel. The aggressive environment under insulation materials and the lack of any visible evidence of corrosion means that if it’s not correctly managed, CUI can lead to catastrophic and expensive failures. Case in point, a study completed in 2002 by a research team of corrosion specialists commissioned by the US Congress titled Corrosion Costs and Preventive Strategies in the United States reported the direct cost of corrosion to be $276 billion USD a year, that number potentially doubling when indirect costs are taken into account.

Another study performed by ExxonMobil Chemical and presented to the European Federation of Corrosion (EFC) in 2003 indicated that:

As you can see, the costs associated with CUI are enormous. Preventive maintenance is part of the solution to mitigate them. Regular screening for CUI is the first step towards this within asset integrity management (AIM) plans.

Let’s look at it from economical (cost per meter or foot) and productivity (inspected pipe length per day) perspectives. The numbers below are obviously estimations that could be modified to account for specific conditions, but, ultimately, they are representative of the relative performance of the screening techniques presented here.

When there are no obstacles between assets to be inspected and inspectors, performing ultrasonic testing or inspecting them visually is a reasonable choice. However, considering it costs an average of US$1200 per meter to remove insulation and replace it to assess CUI, these techniques are simply not economical or productive (even more so in the presence of concrete and/or asbestos).

That’s why we’ll concentrate on non-destructive screening techniques able to assess and monitor CUI through insulation and weather jackets in this article.

Among the most common screening technologies used to assess and monitor corrosion under insulation there are:

Understand that it’s not possible, within the scope of this blog article, to cover all typical application parameters. In an attempt at impartiality, I’ve tried to place all the technologies below on equal footing, using a typical pipe with a nominal diameter of 203 mm (8 in) covered with 51 mm (2 in) of insulation, and a 0.5 mm (0.02 in) aluminum cladding as case study for my analysis. For those techniques where it’s relevant, I’ve used a 76.2 × 76.2 mm (3 × 3 in) resolution and full surface coverage. Finally, a “day” refers to an 8-hour workday.

Because RTR isn’t capable of full coverage, it isn’t fair to compare it to the other techniques. However, it’s ubiquitous, so I’ve based my estimates on two profiles (6 and 12 o’clock), which, productivity wise, advantages RTR over the other techniques that offer full surface coverage.

Conventional PEC inspections have become a well-established technique, over the last 25 years, for its capability to screen for defects without the need to strip insulation or weather jackets over surfaces under test. It offers full coverage, but is only capable of grid mode scans at pulse rates around 1 pulse/s. Inspections with conventional PEC, to be fair, at the high end of the price range:


So, based on this logic, RTR provides the best bang for the buck. But, does it really?

As first developed and implemented in the 90s, PEC has evolved very little for various reasons. Over the last few years, new, better-performing and easier-to-use PEC systems are appearing on the market. I would truly be remiss in my analysis if I didn’t compare them to the rest.

Systems like our Eddyfi Lyft® have recently come to market, which can acquire data dynamically, as well as in a grid, and still offering full coverage. That changes the game. Under the conditions used for this study, I could have use the system in dynamic mode at up to 0.4 m/s (15 in/s).

At the high end of the price range, in dynamic mode, Lyft inspections:

At the high end of the price range, in grid mode, PECA inspections:

At the high end of the price range, in dynamic mode, PECA inspections:

This is 8.4 times more productive than conventional PEC! Watch the following video to get a sense, in time lapse, of just how radically faster PECA (with the Grid-As-U-Go attachment) inspections are compared to other PEC methods (grid and dynamic scans).

Considering the enormous costs associated to not knowing the location and extent of corrosion under insulation and the sheer amount of pipes and vessels to be inspected in aging facilities, getting the most out of your inspection dollar makes a lot of sense from budgetary and bottom line standpoints. Since available inspection technologies have a major impact on your bottom line, as we’ve demonstrated, choosing the right one may mean the difference between a high profit margin and a catastrophic failure.

Depending on your current inspection technology of choice, using PECA could improve productivity roughly 5 to 53 times and be as much as 20 times cheaper! 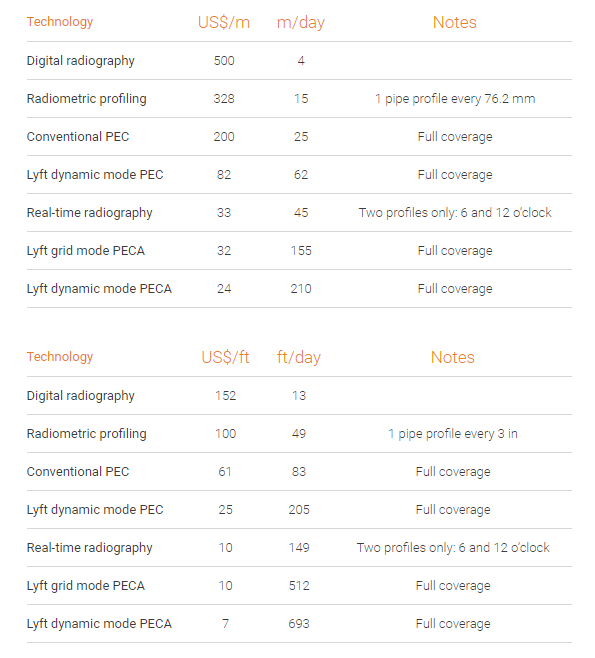 Interested in learning more? Get in touch with one of our NDT experts by completing the form below and staying Beyond Current with future articles related to inspecting pipes for corrosion under insulation - plus much more!