When dealing with plate, bar, composite, or tube inspections, one of the criteria is productivity. Phased array technology has been used for quite some time, replacing conventional ultrasonic testing, or UT, inspection thanks to its ability to steer and scan acoustic beams at high speeds. To reduce cycle time and increase production capabilities even further, the Panther™ by Eddyfi Technologies is equipped with advanced inspection modes which allow an improvement in scanning speeds over standard linear scans by a factor of ten. This article shares more information on the inspection modes responsible for higher productivity.

Typical plate, bar, composite, or tube inspections using phased array technology usually involves electronic scanning, a process that reproduces the inspection done by manually moving a standard UT probe. An ultrasonic beam that depends on the aperture selected is electronically translated across the entire probe. This allows for faster inspections and it limits the mechanical displacement.

Electronic scanning is typically done with a single sub-aperture and thus productivity depends essentially on the number of sequences (number of firings) that the system needs to perform before moving mechanically to the next step. While the Panther has a pretty high Pulse Repetition Frequency (PRF) of 30 kHz, the time to perform one sequence is usually dictated by the travel path (delay + range) as the phased array ultrasonic testing, or PAUT, system has to wait for the ultrasounds to propagate before exciting another sub-aperture. The delay and range are usually fixed and based on the height of a water column or wedge and thickness of the part under inspection. 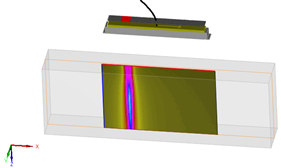 So, the main option to improve productivity is to reduce the number of sequences. The Panther proposes two additional modes on top of the standard electronic scanning: Mixed mode and Super Fast mode. 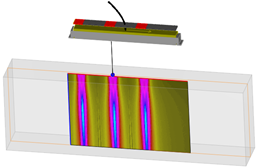 However, one must pay attention to potential interaction between the various beams generated by the parallel firings.

The Super Fast mode consists of firing all the elements of the array simultaneously without any delay laws generating a large plane wavefront. Signals are received on all the elements simultaneously thanks to the parallel architecture of the Panther. The system then reconstructs up to eight virtual sub-apertures in parallel, similar to the mixed mode. The advantage of this mode is the fact that there is only one sequence providing optimum productivity.

The following animation shows the various modes with respect to time.

In terms of acoustic performance, the three modes were compared for the detection of a 1.2-millimeter (0.05-inch) flat-bottomed hole in a 100-millimeter (4-inch) aluminum plate.

The previous images show the B-scans and A-scans obtained for each mode. The linear and mixed modes are identical in terms of signal shape and amplitude as the sub-aperture used for the Mixed mode is identical to the single sub-aperture used for the electronic scan. For the Fast mode, the response of the FBH is slightly larger and the front surface echo is longer. In terms of detectability, however, the result is pretty much the same and the amplitude of the FBH echo is nearly identical to the responses obtained with the electronic scanning and Mixed mode.

In terms of productivity, there is a big difference between the three modes. Assuming no ghost echo, the theoretical scanning speeds achievable with each mode are displayed here assuming a mechanical step of 2 mm, which usually enough to obtain the sensitivity and coverage required.

To illustrate this, the following video shows the detection of FBHs on a stepwise mockup using a multigroup configuration combining a Mixed mode group for the inspection close to the surface and a Super Fast mode for anything deeper. The inspection is done in immersion with a 128-element, 10-MHz linear array probe, a 2-axis mechanical displacement provided by a robot, and a 128:128 Panther. The video presents the graphic user interface of the software in acquisition showing the C-scans in amplitude and depth for each group. The speedometer shows that a scanning speed of over 750 millimeters (30 inches) per second is reached for this multigroup configuration.


The Panther provides all these modes natively and allows their combination to provide full volume inspection of very thick components while enabling high scanning speeds.


While advanced modes are perfect for high productivity and discrimination of bad parts, TFM provides optimum spatial resolution for greater sizing accuracy and defect characterization. The Panther offers the best of both worlds.

Panther is compact (300 × 220 × 155 mm/11.8 × 8.7 × 6.1 in), IP54, and takes advantage of its parallel and stackable architecture (up to 16 units of 128 channels for a total of 2048 channels) to meet the speed and resolution requirements for the most demanding applications. Contact our team of experts to arrange a remote demo to see exactly how it offers better and faster inspections today!