Corrosion Under Insulation: The 7 Inspection Methods You Must Know About | Eddyfi 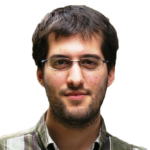 As discussed in The Corrosion Under Insulation Plague: What You Need to Know, corrosion under insulation (CUI) is one of the most difficult corrosion processes to prevent. The reason for that is, by and large, no matter the precautions taken, water invariably seeps into the insulation and begins its dirty work—sometimes unseen until process leakage occurs. Data shows that about 60% of pipe leaks are caused by CUI. That’s not good.

CUI is difficult to find because the insulation covers the corrosion problem until it is too late. Removing insulation, inspecting, and then reinstating the insulation after inspection is an expensive process. Inspecting without removing insulation and weather jackets greatly reduces the cost of inspections. Non-destructive testing methods to detect CUI in such a way is therefore a major benefit to the industry.

There are a number of methods used today to inspect for CUI. No one method is ever used by itself—several methods complement each other for optimal results, but that’s not the object of this article.

The most common and straightforward way to inspect for corrosion under insulation is to cut plugs in the insulation that can be removed to allow for ultrasonic testing. The other commonly used methods are radiography, and complete insulation removal. More advanced methods include pulsed eddy current. Here are the seven most common methods of inspecting for CUI with their pros and cons. 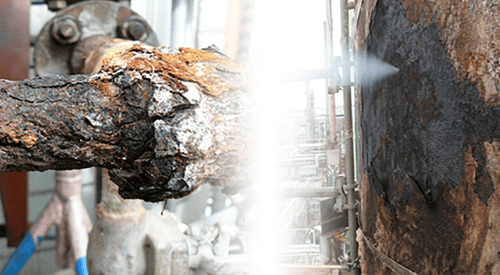 The first and simplest method of inspection is, of course, visual inspection. It involves removing the insulation, checking the surface condition of the pipe, and replacing the insulation. It’s also the most expensive and time-consuming method. The logistics of insulation removal occasionally involves asbestos and attendant complications. Process-related problems may also occur if the insulation is removed while the piping is in service. Nowadays, visual inspections are usually performed with portable visual scanners, which allows for precise, traceable sizing of surface corrosion at the outer diameter.

There are two basic types of visual inspection: 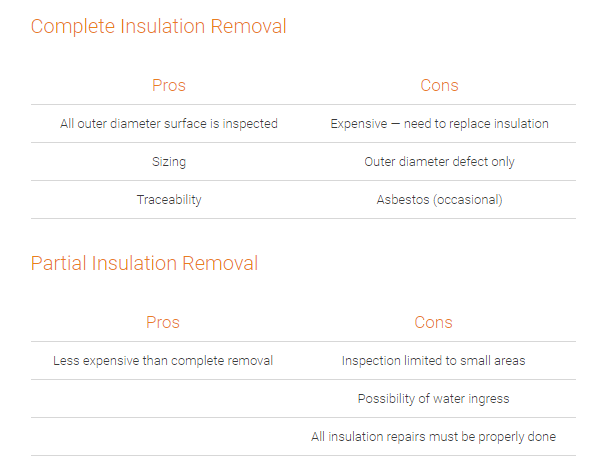 This method as used for NDT is designed to detect wet insulation in pipes and vessels. A radioactive source emits high-energy neutrons into the insulation. If there’s moisture in the insulation, the hydrogen nuclei attenuate the energy of the emitted neutrons. The inspection instrument’s gauge detector displays a low-energy neutrons count proportional to the amount of water in the insulation. High counts per time period indicate more moisture and a higher probability of the present of CUI.

X-Rays or Radiography to Detect CUI

X-rays are used in a variety of ways in detecting CUI, such as real-time radiography (RTR), computed radiography (CR), and digital detector arrays (DDA; flat-panel detectors).

RTR provides a view of a pipe’s outer diameter profile through the insulation. The real-time device has a radiation source and an image intensifier/detector. There are two major categories of RTR devices on the market today; one using an X-ray source and one using a radioactive source. Each has its own advantages and disadvantages, but the X-ray systems deliver far better resolution than the isotope-type equipment. If there is a change in the outer diameter profile, it normally means a corrosion buildup. However, it’s not possible to measure thickness and difficult to correlate the loss in wall thickness and the corrosion profile. The method is limited to small structures and requires access to both sides. 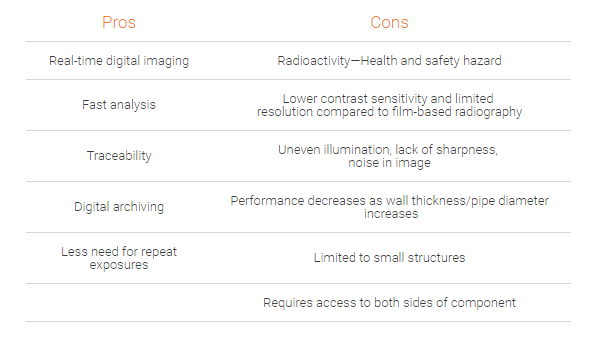 CR uses equipment very similar to conventional radiography, except that in place of a film to create images, it uses an imaging plate made of photostimulable phosphor. A special cassette placed under the body part or object to be examined houses the imaging plate and the X-ray exposure is made. Hence, instead of taking an exposed film into a darkroom for developing in chemical tanks or an automatic film processor, the imaging plate runs through a special laser scanner, or CR reader, that reads and digitizes the image. The digital image can then be viewed and enhanced using software with functions very similar to other conventional digital image-processing software, such as contrast, brightness, filtration, and zoom. 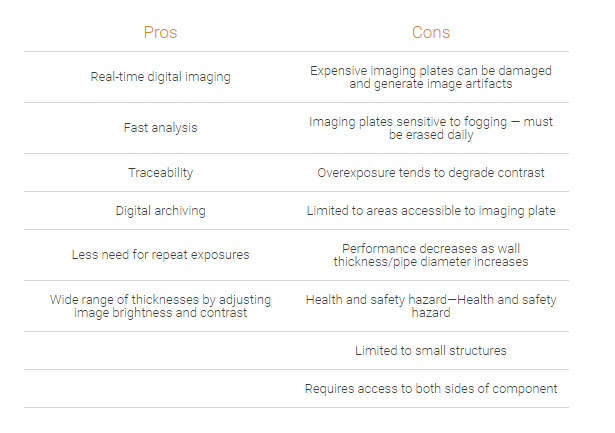 DDAs or flat-panel detectors (FPD) are a class of solid-state X-ray digital radiography devices similar in principle to image sensors used in digital photography and video. X-rays pass through the object being imaged and strike one of two types of detectors: indirect detectors or direct FPDs. They are more sensitive and faster than film. Their sensitivity allows a lower dose of radiation for a given picture quality. They are lighter, far more durable, smaller in volume, more accurate, and have much less image distortion than image intensifiers/detectors and can also be produced in larger sizes. 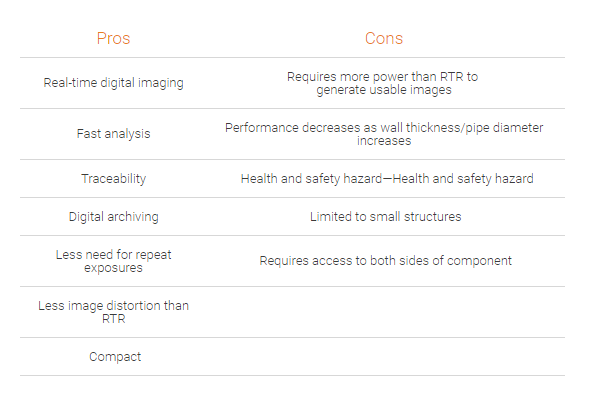 Referred to as UT, it is the non-destructive measurement of the local thickness of a solid element based on the ultrasound wave’s time of flight. This type of measurement is usually performed with an ultrasonic thickness gauge. This is effective, but limited to small areas. Just as with partial removal of insulation, it’s expensive to cut plugs out of the insulation and impractical to cut enough holes to get reliable results. The inspection plugs can compromise the integrity of the insulation and add to the CUI problem, if they are not properly recovered.

PEC is an electromagnetic method to determine the wall thickness of electrical conductors. The PEC probe is placed on an insulated pipe or vessel. A magnetic field is created by an electrical current in the transmitting coil of the probe. This field penetrates through the cladding and magnetizes the pipe wall. The electrical current in the transmission coil is then switched off, causing a sudden drop in the magnetic field. As a result of electromagnetic induction, eddy currents are generated in the pipe wall. The eddy currents diffuse inwards and decrease in strength. This is monitored by the PEC probe and used to determine the wall thickness. The thicker the wall, the longer it takes for the eddy currents to decay to zero. Applied operating principles of PEC vary from system to system. Generally, to obtain a quantitative wall thickness reading, PEC systems use algorithms that relate the diffusive behavior in time to the material properties and the wall thickness.

PEC averages wall thickness over a relatively large foot print. As a result, PEC is suitable for general wall loss, but isolated pitting defects cannot be detected, making it a screening tool only. 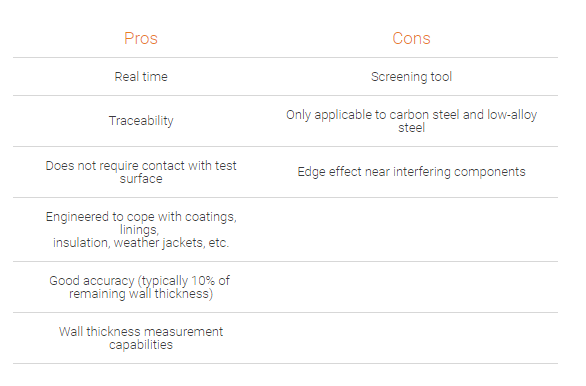 CUI is a plague that NDT contributes to mitigate, but the variety of inspection methods all have merits that doesn’t necessarily make one better than the rest. Indeed, they often complement each other, succeeding where another fails. Specific combination of inspection methods depends greatly on specific inspection conditions.

Tell us what you think about what your preferred combination of methods of inspecting for CUI is and why. It is safe to assume that no one method is ever going to eradicate CUI unless the industry comes up with materials that do not corrode. We'd love to continue the conversation. Get in touch with us by completing the form below and stay Beyond Current.