In this article I share my first experience with the guided wave testing (GWT) instrument, Sonyks™.

It must have been around 2008 when I first discovered GWT in the field of non-destructive testing (NDT), and I was quite intimidated by the complexity the subject was showing firsthand. As an experienced ultrasonic testing (UT) operator from the ‘90s, I had trouble understanding parts of the physics, particularly the behaviour of the different waveforms, as guided wave testing does not really compare to traditional UT. I saw a variety of companies starting to develop inspection systems based on different transducer techniques, and in most cases the results were astonishing. However, the pioneering led to some failed initiatives as well. Read to learn more.

I was first drawn to guided wave testing when I was closely involved in developing a short-range guided wave tomography system in 2012. During that period, I learned much about guided waves and the technique's potential. Last year I completed the CSWIP L1 guided wave training course. This was an excellent opportunity for me to deepen my GWT knowledge to better assist potential users. We used Eddyfi Technologies’ older generation Focus+ system and the Piezo-type collars during training. The training went great, and towards the end I felt confident in my skills to operate the equipment. You really had to pay close attention to what you are doing when collecting data and during analysis.

Half a year later, Eddyfi Technologies launched Sonyks and I had the opportunity to test out the most advanced guided wave ultrasonic testing instrument! The system is the successor of the Teletest Focus+ system and has been completely redesigned, packing unprecedented new features and capabilities.

The standard Piezo collar range still exists from 15 to 182 centimeters (6 to 72 inches) but the smaller 5 to 10 centimeter (2 to 4 inch) diameter tool, previously called Mini Test, has been replaced by Magnetostrictive tools. The Piezo tools have been completely redesigned. First, the ring spacing has changed to create a broadband frequency spectrum and improved power output. The wires to connect the individual modules are now mounted inside the collar, simplifying setting up the collar before inspection. The hinge to lock the collar in place has also been greatly improved, making it easy to mount the collar on any diameter pipe. The whole collar connects to the Sonyks data acquisition unit using a single multicore cable. The Magnetostrictive tools are available from 5 to 10 centimeters (2 to 4 inches). Because we no longer use Piezo transducers, the spatial resolution has dramatically improved for small diameter pipes. Combining this with having a 32, 64, and 128 kHz collar presents an unmatched opportunity for inspecting and identifying the often numerous small defects found in small diameter, short section pipework.

The data acquisition unit is newly housed in a battery-operated, light, and portable case similar to other Eddyfi instruments such as the Reddy®, Swift™, and Amigo™ 2. It includes a pump and a large touchscreen. The electronics have been completely redesigned with a much-improved signal-to-noise ratio (SNR) as a result.

The most significant change is in the Sonyks software and how inspection data is collected. When starting your inspection, data is gathered while you complete the settings. Before you know it, all the information is collected in minutes. Data is acquired through the full matrix capture (FMC) principle, meaning that all possible transmitter-receiver combinations are recorded for a broad spectrum of frequencies. When your scans are complete, the system can be dismantled and the data analysis process conducted in a more comfortable environment. All the data is there, including any focusing you may want to do! The big advantage is that the risk of missed defects, incomplete focus or frequency data is eliminated, avoiding the risk of an expensive re-inspection later. The software is also redesigned with ease of use at its core. Data annotation is much easier with a "circular menu" from where you can choose the annotation type you wish, including setting the distance amplitude curve (DAC) markers. 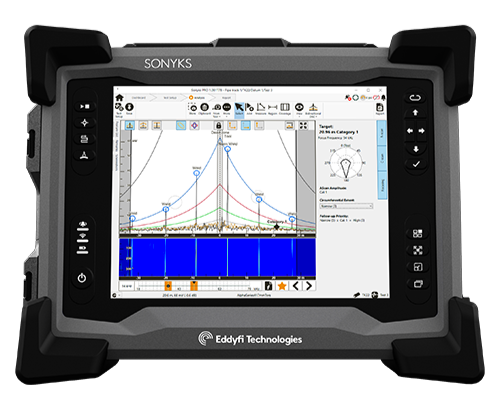 Anyway, before my enthusiasm has you running to our online store, let’s stick to the facts and have a look at the test performed.

The test performed is an excellent example of what I think is a new sweet spot for guided wave testing: short sections of small diameter pipe of which we find hundreds of kilometers at every plant around the world. For sure, this system works equally well on larger diameter pipes using the Piezo collars. Another great advantage is being able to use existing collars with Sonyks along with collars made by other vendors, allowing the user to minimize their upfront investment.

In conclusion, I can say I’m incredibly impressed with this new Sonyks guided wave testing solution by Eddyfi Technologies, and I feel very confident that others will also share my findings. If you would like to discuss the options of the new guided wave testing system with me, you can find me here or get in touch with our team who will be happy to help with your general inquires on how to stay Beyond Current.