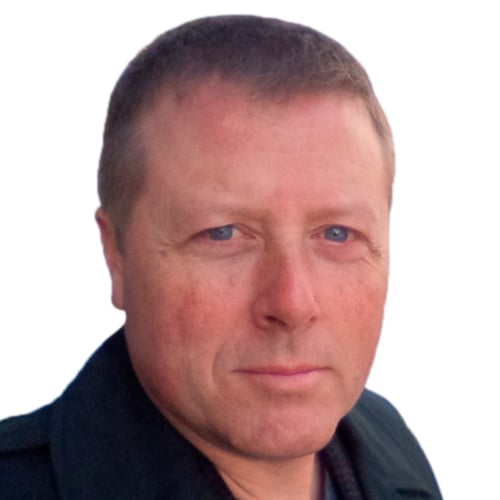 We were recently invited by the Royal Canadian Navy (RCN) to demonstrate eddy current inspection of small‑diameter cupronickel tubing in the lube‑oil coolers of a ship in dry dock. Since this type of heat exchanger is fairly standard in the power generation world, we didn’t anticipate problems. The customer, previously presented with the added benefits of the Probot™ probe pusher-puller system for tubing inspections, had expressed a desire to see it in action. Routine follow‑up questions revealed that there were between 800 and 1,000 tubes in each heat exchanger. The tubes were thin-walled, 0.5‑inch (12.7-millimeter) OD, 70/30 copper‑nickel alloy. The primary side fluid was sea water, with the engine lubricant running over the secondary side.

We were warned that the space was tight, and a preliminary walk-down a week ahead of inspection confirmed that, yes, space was tight. It was one of those jobs where we thought we had it all figured out...

The day of inspection arrived, and after a morning check-up of the inspection site, we concluded that the effort to bring the Probot on board might not be justified given the restricted space and the requirement to haul the drive into and out of the bowels of the ship. We elected to go in with just a laptop; the durable, battery powered and highly versatile Ectane® 2; and a standard eddy current bobbin probe. In reserve, we had DefHi—the high‑speed, high-resolution eddy current array probe— to further examine indications of interest, and Probot was on standby if time permitted.

In we went, proceeding ever deeper into the ship. With each ladderway we descended, I was even more convinced that leaving the Probot behind had been a good call. Then we got to the heat exchangers which were located in a snarl of piping and tubing about eight feet (2.4 meters) below a narrow walkway. With the recirculating heads removed, there was at best 24 inches (600 millimeters) between the tube sheet face and the omnipresent piping and tubing.

The last leg of the descent to the tube sheet face was a solo operation, given the space. It was a 20‑minute exercise reminiscent of Catherine Zeta‑Jones in the movie Entrapment (but nowhere near as elegant; I blame it on the coveralls). Up close and personal, the piping network was even more daunting.

Once at the tube sheet face, we set up the laptop, inserted the probe into the first tube, balanced, ran out to the end, marked the poly for length and brought the probe back, ready for our first run. It was at this point things started to go sideways. The tubes themselves were not particularly long, only about eight feet (2.4 meters) in total. The initial insertion of the probe was no problem. The tubes were clean and dent free, the probe ran smoothly and did not catch at the far tube end on re‑entry. Similarly, pulling the probe back went reasonably well although the limited space made maintaining a constant pull‑speed a challenge. It was when we attempted to reinsert the probe that we got our first surprise.

About two feet in, the probe stopped suddenly.

Tube restriction? No, just the poly tangled up on a protruding bolt behind. Clear the tangle and then... stopped again. This time a different bolt. Then a valve. Then an elbow. Time for a new plan: finish pulling this tube then reorient the poly to avoid the tangles. Reorienting simply gave us three new and different tangle points on insertion. By coffee break, we were ready to admit we had a problem. 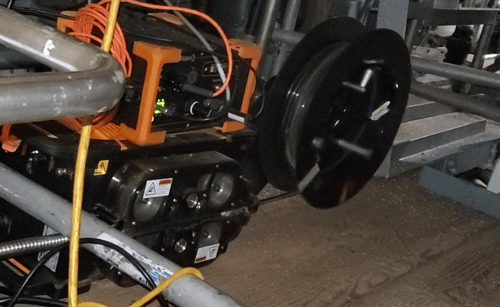 Figure 1: Probot on an elevated platform above the heat exchanger

I wouldn’t exactly say it was easy, but as it turned out, getting Probot into the ship was not as bad as we had expected. With its slim profile and reversible orientation, we were able to find Probot a spot on the walkway where everyone could step around it. We configured it for fully remote (one‑person) operation. In this mode, the person at the tube sheet face has complete command of the system. The probe could be jogged in or out, launched on a precision‑distance automated run, or emergency stopped in the event of an obstruction. All of these functions were available from the remote-controlled gun at the end of the probe conduit. After running a few tubes at lower speeds to get a feel for the system, we set tube insertion to 60 inches (1.5 meters per second) per second with recording on‑the‑pull at 40 inches (1 meter per second) per second which works out to about 4 seconds per tube. And no more hang-ups on obstructions.

Acquisition of the first heat exchanger, including rescans and high‑resolution DefHi scans of tubes of interest, was completed before the end of the shift. The second heat exchanger was completed in just under four hours from beginning calibration to end calibration, averaging just over 15.5 seconds per tube (including rescans, stops to mark obstructed tubes, and operator changes).

Areas of interest identified with the bobbin probe were rescanned with the high resolution DefHi probe. These rescans provide a better understanding of the damage mechanisms and the context in which they are found improving analysis confidence and allowing asset owners to make the best possible decisions.

Figure 3: C-scan images from DefHi data in an area with indications of ID corrosion/erosion between the first support and the tube sheet

The following image presents the setup used for the inspection. The conduit that leads the probe away from the Probot (which is to the right, out of sight) was then passed below the railing and down to the probe operator seated in front of the heat exchanger. At left in the same image, you can see an external monitor (placed so that the customer could see what was happening from above). In front of and below this monitor is Olivier Rousseau‑Cyr, applications engineer at Eddyfi Technologies, holding the Probot remote control with a laptop in front of him. Olivier won the spelunking award with his ability to squirrel in and out of this area in seconds. 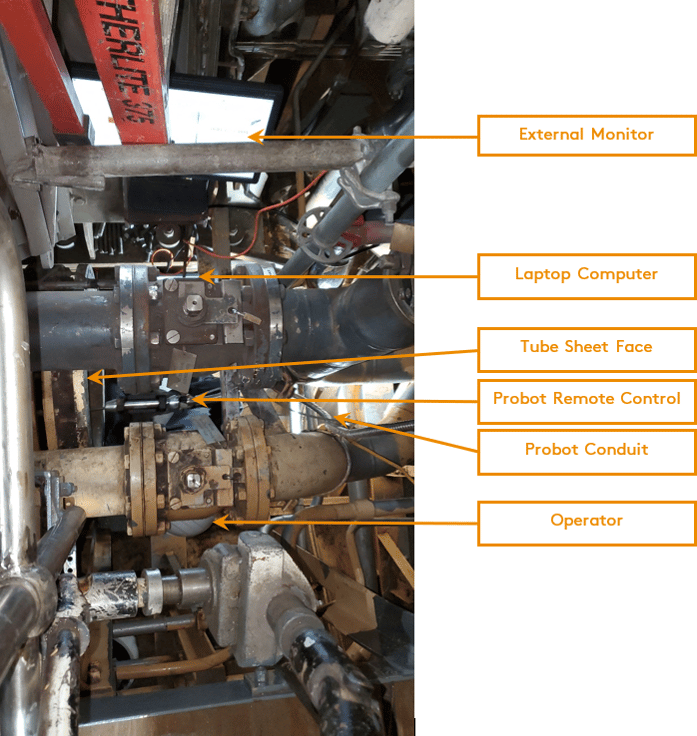 Data quality was excellent; the DefHi probe delivered as promised, providing high quality imaging of problem areas identified by the bobbin probe, and TubePro™ brought it all together in a comprehensive report. And in the final analysis, the Probot proved versatile enough to perform in tight quarters, allowing us to complete the inspection of close to 1800 tubes in fewer than two shifts. This outing proves that, regardless of your inspection size, the Probot is always a great tool to have in your equipment fleet. 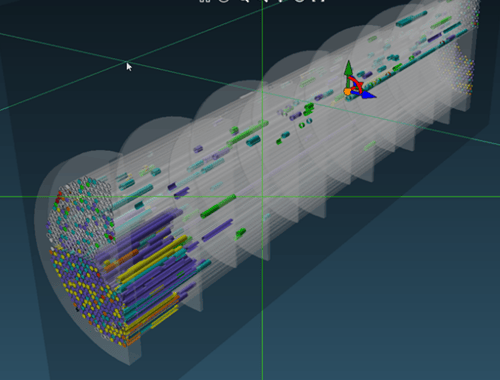 If you’re interested in seeing our advanced inspection solutions, get in touch to arrange a demo and see exactly how Eddyfi Technologies keeps its clients Beyond Current.